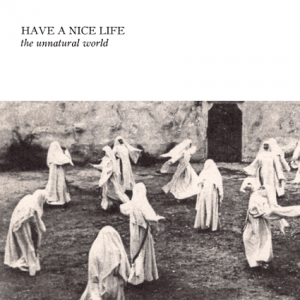 Have A Nice Life

These days, the means to record music of a certain professional-sounding quality in your own bedroom or study is more accessible than ever. What’s more exciting is that these projects are able to reach broader audiences, no longer held back by the stigma of the older generation of “lo-fi” projects. The sound of clearly amateur recording set-ups is now more a stylistic choice than anything, and that coupled with the ease of self-distribution, the merits of a band’s work is able to stand out on its own without the convoluted worlds of labels and radio airplay limiting the listener’s perception. Have a Nice Life exemplifies the benefits of these circumstances with their latest long-awaited release The Unnatural World.

The music has an odd tension throughout. The music nods to several conventions from older source material, 80s new wave and goth specifically, while presenting it awash in tinny, digital reverb and a highly-compressed sound that grants a strange intimacy. In 'Burial Society', the listener is really given an uncomfortable close-up listen. The MIDI percussion and keyboard make no attempt to sound authentic while more organic feedback swirls as a dream only to be cut through by panicked, confessional vocals. This balance is struck throughout, the artificial and sterile offset by the organic and chaotic, and it creates a compelling emotional core. The sound seems clipped and degraded throughout, a digital-era mimicry of antiquated tape recordings that flake and distort.

Underneath these layers of manufactured ugliness, however, it’s clear that there is a focus placed on melody and even beauty.  Even at its most harsh, in the track 'Dan and Tim, Reunited By Fate', there is harmony and gentleness to be found at the risk of strain on the listener. For those who care to take a deeper listen, there are many rewards behind the initially harsh glare on the surface. In a way, then, the sonics and how they relate to one another becomes the most interesting instrument on the album. Beyond being a collection of impassioned songs, the album aims to become a definitive statement of the GarageBand Generation. What is on full display here is the power that can be harnessed when limitations are used as challenges or parameters, prompts for the artist to create something that reaches beyond their own means. In these moments, the album is at its most successful, and there are several throughout.

Album closer, 'Emptiness Will Eat the Witch', explodes the pattern by stripping the music down to its most basic strengths. A melancholic mood piece, the washed-out reverb pushed out to the extremes as a synth organ becomes surprisingly human. The meditative vocals reach a crescendo becoming a sort of religious chant, and the music leaps out of the bedroom into the sublime. It proves the unspoken premise of the album: that music is made wherever you can and its possible heights are unknowable until the attempt to ascend is made in earnest.