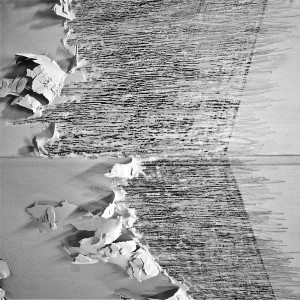 Out on February 24th through

Fatalists are a “prog punk” trio from Edinburgh (Zak Cotton (guitar/vocals), John Pettie (drums), Chris Sharples (bass/vocals), and that’s pretty much all I knew about these guys - minimal information, and a copy of their second album Unwelded to listen to. What I know now is that this is another huge reason to say that 2014 is already shaping up to be a GREAT year for your ears already! There’s plenty here for fans of all things noisy, angular and melodic, a mixed bag of sonic flavours that you’d normally expect to confuse your aural taste buds. Instead, they meld together to create the perfect blend that will have you wanting to press play again as soon as.

Opener  ‘Old Hag’ starts things off with no intro or warning, and within seconds has you slowly nodding in time with the biggest of grins. Drums, guitar and bass swim around you in a sea that has an ever-changing tide, and schizophrenic vocals float by like the wreckage of a ship sunken by mermaids. It’s a hypnotic beginning to an album that takes hold of you and doesn’t let go until closer ‘The Gentleman’ swings around with the unspoken confidence of a trio that have spent years working on this, and it shows throughout.

‘No Compromise, Just Good Times’ follows, and begins with feedback that shakes your head momentarily before all instruments combine to use your brain as a psyche-rock dancefloor. Get used to that grin that you had in the first track because it ain’t going anywhere. Buckle up and enjoy the ride – there’s gonna be plenty of twists and turns along the way.

Dischordant riffs and off-beat rhythms can be heard in ‘Whispers in the Yard’ and ‘Peer to Peer’, and when it’s just instrumental at times (this can be said for most tracks), Fatalists aren’t afraid to enter territories unknown. But it’s obvious that these guys have had a map all along and know exactly where they were going. Ten locations that you’ll want to revisit “time and time again” (‘Shoot the Crow’).

I really hope great things happen for this band in 2014, because this is by far one of the most enjoyable albums to listen to that I haven’t stopped playing since it appeared in my inbox. Released at the end of the month, this is something you should definitely add to your collection. There’s a swagger here that isn’t cocky in the slightest, but these guys know exactly what they wanted to do with these songs, and it’s done in great style. “I can take you home, or take you far away” yells Zak on ‘Seppuku’.  You can take me wherever the hell you want as long as this album is on, played at the highest volume on repeat thank you very much!