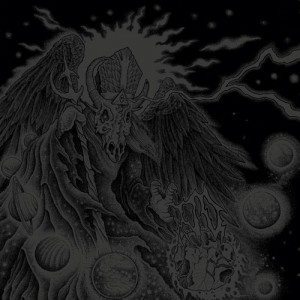 Out on February 20th through

I wonder how many friendships dissolve after a split EP. Two bands, often close with one another personally and often in sound, work together to create a product that is ideally one work with two complimentary halves. More often than not, however, it becomes inevitable to compare the two and very rarely does someone recommend a split without saying “But _______’s side is way better”.  I wonder if the members of Faith still talk to the guys who were in Void. It might be unfair to compare the two bands based only on proximity, but everyone does it, and I’ve never seen anyone wearing a Faith t-shirt.

The first side of this split comes from Black Shape Of Nexus, a German band who have been around since around 2006, and it’s clear they’ve studied their Neurosis textbook intently right out of the gate. A stab of feedback slides into some echoey clean guitar, playing against a rogue satellite’s S.O.S. signal that bottoms out into a sudden drop of a riff that grants heaviness while granting the rest of the band room to breathe. The rest of the song takes on a familiar structure for this style of music, creeping along until about the halfway point before double-timing it into a crusty spiritual cousin to 'War Pigs'.  Malte Seidel’s vocals punctuate throughout and honestly at times he’s a dead ringer for Scott Kelly. You would be hard-pressed to find better source material as inspiration, however a well-done imitation is still less satisfying than something truly original. I can definitely bang my head to second track 'Always and Only', but would have preferred to hear a band attempt something outside of their reach and barely pull it off than to retread ground even as a perfectly-performed note-for-note facsimile. This is what makes it difficult then, to describe Black Shape Of Nexus’ material as half of a larger piece of work because when coupled with Lazarus Blackstar’s side of the EP it is easy to lose focus on the intent of Black Shape Of Nexus’ music and how it relates to the other band’s offerings.

While it might be unfair or even unproductive to tally up Lazarus Blackstar’s pros and cons side-by-side with Black Shape Of Nexus, one thing does become immediately clear when putting on the first track, 'Command and Control', of their side of the split. Lazarus Blackstar has a sound that, while clear in its origins and influences, is inarguably their own. They have a unique point of view, a bleak and gnarled vision that is best communicated through their briar patch riffs and Mik Hell’s death-indebted growls. The band takes their time through track 2, 'Whispering Through Broken Teeth', laying down a foundation of what sounds like it could have been a Helmet riff split down the middle and stretched out on a rack. The trudging pace lends a claustrophobic vibe that echoes Dystopia, trapping you in its miserable gloom before the band lets up and allows the sound to bloom into something airier. Semi-melodic vocals accompany keyboards as the track locks into its closing groove: still heavy, but with a levity to it. The sound is that of a band who knows where they’re going, and while they seem to have patience for a good groove Lazarus Blackstar also demonstrates a preference to not stay in one place for too long. The band brings things to a close, and it sounds like a true and logical endpoint rather than an idea that lost its momentum.

So what do these bands do to complement each other? They each use sludge as a starting point, and both seem interested in the spacier atmospheres within that genre. The split, taken as a whole, is a great embodiment of two different takes on a genre that's steadily growing in exciting ways. In this way Black Shape Of Nexus’ side does fit well with Lazarus Blackstar’s material, although through their juxtaposition the former’s weaknesses highlight the strengths of the latter (and vice versa). Each side provides something suitably heavy for those who have skin in the game hoping for new meditations on “the riff,” but Lazarus Blackstar’s take on the genre has a fresher and more earnest sound. And while it’s not a contest, and shouldn’t be, I definitely know whose t-shirts I’m shopping for.