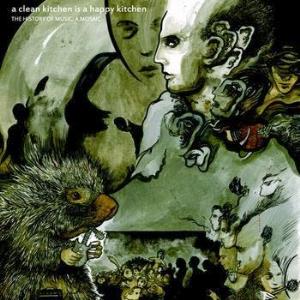 A Clean Kitchen Is A Happy Kitchen

A Clean Kitchen is a Happy Kitchen are an art-noise rock trio from the countries Belgium, The Netherlands & Scotland, and this is their second full length release following the split 10” that they did with Silent Front in 2012. This is eight tracks of disjointed riffs, sometimes inaudible vocals and schizophrenic style mixes thrown in for good measure. An album with no intention to impress, but does so for that very reason.

‘Innocence is Lost’ kicks things off with glorious feedback that turns into one of the best sounding distorted guitar sounds to have ever graced my ears! It’s a good 40 seconds before the stomping bass and drums join the party for an outright jamfest, with effect-soaked vocals ranting away. Get ready for more madness along the way, as this is some head-fuckery that will leave you wanting more. And then some.

Trying to hear the drums in next track ‘My Sinister trousers’ is like trying to make out the shadows in a dark room that you’re looking at through a very small keyhole. They’re covered in layers of strings, guitars and synths like a blanket of fog in a dimly lit street, but soon make their way through - and as it all clears away, the last third transforms into a jazz-fuelled film noir soundtrack. Love it!

There’s a great mix of styles and genres here. ‘The History of Music: A Mosaic (Part 6)’ could easily fit onto Mr Bungles Disco Volante album as if it were an item of clothing passed on from one identical twin to another. 10 minutes of free-form prog that leads you through the unknown with no idea of where you’re going. And you’ll be thankful for it.

“Before you take a dump, check the quantity of paper left” is repeated on ‘Floyd Is Warped’ and is a great tip (that we should already know to be honest) for all. What starts with a sample of what could be someone’s Scottish granny chatting away is overlapped by guitars and drums that soon turns into a Shellac sounding groove fest that Steve Albini would definitely approve of.

Finishing things off , ‘Bed Bugs’ is the sound of a lounge act playing away in a sleazy underground bar full of criminals, hookers and dodgy cops. As cigarette smoke fills the air, all instruments slide down the walls and melt away into your conscience before slowly fading away into nothing.

This is an album that could very well be the cool kid at school that never gave a shit about being popular, and who did things his way – by his rules and his rules alone. A rewarding listen that you should definitely wrap your ears around as soon as you can!