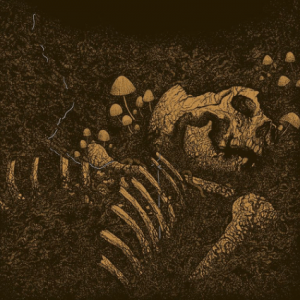 The body has been there for a while, years even.  By now only bones remain, and even those  are no longer intact. The moss of the forest floor has begun to reclaim the organic matter that used to be a human being. Mushrooms leech minerals from the soil and thrive, eerily innocuous among the remains of someone whose story is lost now. Maybe those who loved them had to give up long ago, faintly wondering in the back of their mind if their questions would ever be answered or their grief resolved. This image, used as an album cover, perfectly encapsulates both the dread and the disquieting calm that permeates throughout Aokigahara Jukai, the newest album by Thrall.

Using the word “calm” might be misleading, and in this sense it does not refer to the music itself. Most of Thrall’s vision is executed here with a tempered, bludgeoning sound. Much has been written about Thrall’s ability to fluidly weave several different influences and sub-genres together to create their music, and it is true that the arrangement and craftsmanship of these songs is impressive in wrangling everything from the crunch and churn of thrash to sweep-picking black metal flourishes. More impressive, though, is that these touchstones of different genres are used to blur lines and create something seamless and wholly-formed. Rather than the jerking back and forth effect on which other genre experimentalists often rely, Thrall presents a unique listening experience that somehow feels both suffocating and invigorating in how solidly it stands. So what calmness lies at the center of this music that is vicious, even hungry as it locks into a death-obsessed groove?

While many picture a kinetic and hyper-futuristic Tokyo when thinking of Japan, there are also many rural areas. Forests shrouded in mist, mountaintops which stand peaceful and alone, another Japan that seems far away in place and time from the usual mental image of the neon-lit intersections of its more populated cities. The album Aokigahara Jukai is named after one of these forests. “The Sea of Trees”, as it translates, sits at the foot of Mount Fuji. Aerial photography gives a sense of peace, maybe even granting a sort of spiritual aura, and from a distance the grim truth behind this forest is hidden. Aokigahara Jukai has become better known as the most common site for suicides in Japan over the years. It is still largely a mystery as to why people choose this location, but there is no dispute that in certain years over one hundred bodies have been found. The problem is so great that signs are posted, silently negotiating with people to reconsider their actions. Yet someone walking through this forest is likely to stumble upon someone tucked away in the brush or to see a body hanging from one of the thousands of trees. People who decided to hide themselves away in order to take a tragic, irreversible step into the void. The forest remains still, but it is not a peaceful stillness. The density of the trees is also known to create an otherworldly quiet throughout. This is the terrifying calm that drove the members of Thrall to write these songs, and it is a rare instance in which the subject matter discussed is inseparable from the end result. Each chord, each pound of the drum becomes a confident and unwavering step toward something from which most of us try to hide but that the band refuses to ignore.

It would seem like this is a bleak journey to take with Thrall, and at times the weight of the material - not to mention the ferociousness of the music itself - is draining. What earns Thrall great respect and credibility is that they do not engage this material lightly. Thrall explores death, isolation, misanthropy, and other themes in a way that demonstrates a steady and artful hand. Thrall creates an almost meditation on these subjects with complexity and sensitivity that many bands ignore completely. These songs are not meant to shock or disgust, nor are they pretentious in their exploration of deep philosophical problems.  When listening to 'Longing for Death', it is easy to paint Thrall as an “against the world” nihilistic black metal band with lyrics that seem to advocate suicide such as “I crave/ the silence of the grave/ as this miserable fucking world/ tears itself apart”. But while Thrall begins by inhabiting the mindset of someone who has chosen self-termination, this is merely the starting point in a journey that ends somewhere much more elevated and affirming. In album closer, 'Slaves', Thrall creates a powerful refrain out of the lyric “To live in fear is to be a slave”.  This is the defining message at the core of the album, and it is perhaps surprisingly a very positive statement of self-empowerment. Thrall’s strongest track on the album is also the song most entwined with the world of the living, and it does not sound like this is a coincidence.

Ultimately it is important to discuss death, and to do so not out of mere fascination and certainly not as a means to glorify decisions which lead to tragic consequences. It is important because when we discuss death we are really discussing how we live. Death is unavoidable, and while we have some control in how we meet it, it is largely out of our hands. What we do have control of is how we live each moment leading toward the end, whenever that may be. So please, always choose to live, and do so in a way that brings you peace. In spite of its grim context, Thrall has chosen to create something brimming with energy and life. Challenge yourself to do the same.