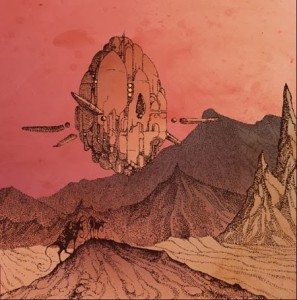 Over a world young in time the shadow of the ship, oval in shape, floats along the surface of the vermillion landscape. Creatures dart over the land, below the enormous alien ship. Not of this sphere it has travelled from beyond the stars from a destroyed world, destroyed by the things it gave life, mankind. Now they have found their new home to settle on, start again, that world is Estron. Estron is also the new album by Irish double drop D klongy chong hi tech Celtic sludgey amp warlords Slomatics. Klongy chong being what the riffs sound like.

It's pretty simple with these guys, it's two guitarists with mega down tuned guitars smashing riffs in unison into weird as fucking fuck illegal fx pedals hand built in insane asylums by serial killers, the riffs then pumped into huge amps that hate you and are the real members of the band. The drummer sings too and on this record plays some synth. Yeah. Sounds great doesn't it? They have names too but this isn't fucking smash hits. I do feel but I should name them but, Chris and David on riffs and Marty on the smashy things and vocals. One has huge hair, the other looks like what if Jeffrey Dahmer was into Harvey Milk and the drummer looks immune to earthly weapons.

Labelling something as doom these days is as and has always been as lazy as just taking a pish in your bed rather than getting up for the toilet. Slomatics are more than that and on here definitely offer something that sounds fresh and yet firmly not of this time. They sound a bit like The Melvins so I'd say if you don't like The Melvin's then it's probably best you have a right good think about yourself. Being a concept album (Earth is pumped so a big ships were sent to another world to save mankind), Estron flows fantastically through all 7 of its tracks sounding almost like one long track (why didn't you just do that lads? WHY!).

Opener 'Trogglorite' starts with some wind and sharp synthetic tones, all rising and ending when the drums smash and guitars grunt while the singer sings his heart out. 'Tunnel Dragger' slows the pace a bit and is what could be described as an angrier sounding track upset at something, like your mum when I cum before her. 'Futurian' slows its shit right down, the fuzz is strong here and you have to ponder if the conceptual spaceship is slowing down or the band just fancied doing a slow Kranky number that will set off any sex charged internet warlock into visiting his favourite bung site. 'Lost Punisher' keeps up the "great song titles" form and sounds like Sleep covering early High on Fire. 'And Yet It Moves' is a sea change on the record, it's longer for starters and there's like lead on it, it's a synth but it could be something calling you from somewhere to tell you your wankface is a holy symbol on their plane and the noise is transdimensional prayer. 'Red Dawn' is an homage to John Milius's 80s Cold War paranoid fuelled USA INVADED BY COMMIES movie where the breakfast club tool up an Swayze and tiger blood save Uncle Sam by killing every cunt without the aid of any military training or army grade drugs. This track is an instrumental synth number, it's nice, a nice wee break from the distortion onslaught from the brother's Riff.

It fuses into final track 'The Carpenter' seamlessly I suppose like all the tracks. Another long number this yin starts like Sabbath's the warning without Ozzy mega vocals or the Iommian's guitars. But hold on, the riff bros have finished hoovering lines of grinded up alien bones from suicide girls anuses an are back by command of their amps to lay out one more time some mega big gongy klong numbers. As a fan of the last album I'd wanted Estron to be a more heavier, bigger warped A Hocht and was caught off guard when I realised these guys had actually tried to make something else while following the same theme in sound and heavy.

Again James Plotkin produces and Tony Roberts creates a cover that is so magnificent that it echoes hints of Moebius, Arik Roper and Frank Quitely yet clearly being Tony Roberts in style and creation. Out on Head of Crom Records ( on browny red vinyl) and available on CD from Burning World Records Estron should really be a must purchase for anyone with a taste grounded in the alternative. If you don't buy this you are scum. 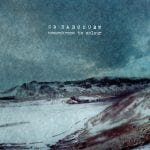