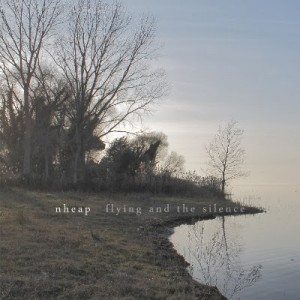 Flying And The Silence  is already the fifth album of drummer, composer Massimo Discepoli under his Nheap flag and it’s the first that came to my notice recently. I believe I encountered this one in my Soundcloud stream and after listening to some tracks I immediately got caught by the relaxing mood but above all the warm sound of the Fender Rhodes piano that features on many tracks besides a whole range of other keyboards and synths. It surprised me that Massimo is originally a drummer though, a job he also does very tasteful.

The music presented here is generally quite relaxing blending atmospheric ambient with a jazzy undertone and some distant post-rock influences as well. But don’t expect to feel asleep as Massimo cleverly presents some complexity as well, just listen to 'Lost in a leaf' and you can hear an almost Porcupine Tree kind of music, especially the drumming reminds me of the great Gavin Harrison. Guitars are sparse on the album but when played they induce the typical jubilant post-rock sphere.('Wandering').

The track that really stands out is 'Expressionism at night', a rather dark ambient jazz piece that tends more towards something suitable for a Bohren & Der Club Of Gore album. Impressive drumming on this one as well!

I already bought this album on Bandcamp. It’s available for a symbolic price of only €1 so come people, do yourself a favor and support this talented guy from Perugia.