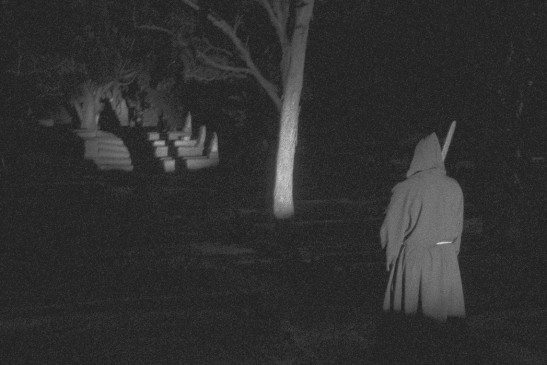 The Nine Gates is now out through Moribund Records

Moon's The Nine Gates is an ecstatic, mystical trip of an album (see our review here).  It's a release that deliberately leaves questions unanswered, though I couldn't help but act on the chance to clear some of the fog surrounding the mysteries therein.  Here are some of Moon's driving force Miasmyr's thoughts on the occult, what emboldens Australia's metal artists, and why he doesn't have plans to retire any time soon.

(((o))): To start off, you debuted Moon in 2008 after playing in a few different bands. What led you to start a project over which you had complete control rather than collaborate with other people?

Miasmyr: Originally it was a side project for ideas that didn’t suit the bands I was playing in and it was also a platform for experimentation. After a while it developed a sound of its own as I noticed a growing interest from others in hearing it. This led to a few demo/EPs being released and some splits.

(((o))): Both of your full-length releases have a sound that seems insular when compared to the rest of the black metal landscape right now. Is this deliberate? Do you pay much attention to what other people are doing or do you try and block that out during your writing/recording process?

Miasmyr: I’ve got a good idea of what sound I want, but I’m always open to experimentation. I listen to a lot of black metal and various other genres such as doom and ambient but I’ve developed my own style and direction I want to head in being a blend of atmospheric and hypnotic black metal. I haven’t found too much of late that I’ve found striking but I go through periods of listening and taking things in and times of productivity where I like to be absorbed in what I’m working on.

(((o))): How important is lyrical content to you? It seems like your lyrics hold personal and emotional weight for you, based on your vocal performance, but the production makes your voice seem more like a musical instrument or element of the general atmosphere rather than a means to clearly communicate ideas.

Miasmyr: The words are secondary to the expression and effect they have. On earlier recordings I often didn’t use any lyrics as sometimes I found they inhibited the more primal form of expression. I gave more detail to the lyrics on The Nine Gates to give the songs a conceptual backbone unifying the musical themes. Whether you can understand the vocals or not it is intended to serve as guided imagery similar to how I experience much of the black metal I listen to. The instruments sometimes serve as voices themselves giving way to a non-verbal oration. Overall I like to keep details hidden and undefined for stylistic preference.

(((o))): Your music is often described as occult black metal. What personal meaning does "occult" hold for you, both in how you define the word and how the concept of the occult informs your music?

Miasmyr: Ultimately the music serves as guided imagery for astral projection using symbols and analogy to illustrate the shadow world. I don’t follow any specific paradigm but draw from a range of left hand path sources; I don’t like to identify too specifically with any pantheons to emphasize the primordial nature of the content.

(((o))): With Moon being a product that is so singularly of your own expression, how much control do you have over the art design of the albums, merchandise, and photography based around the project? To me, the art ties in so perfectly with the themes of the music - is it important to you that Moon be experienced with senses other than hearing?

Miasmyr: I usually direct the artwork, the visual aesthetic can strongly influence how one interprets the music so I’m always looking for artists who will complement the music appropriately. So far I’ve had the most luck with people I know who have a stronger understanding of where I’m coming from musically and aesthetically, otherwise I look for people who already do a style I think might work. Winterkalt’s minimalist 90s cover for the split with Xerbittert was a good break from the standard artwork I’m used to putting forth, whereas The Nine Gates is a good example of the style I usually go for, its symbols and imagery are integral to the music.

(((o))): At the risk of interfering with the mystical aura of your music, where was The Nine Gates recorded? Is this a studio album or do you have the ability to record your music at home (or a mix of both)? What are the artistic benefits behind the process you use to commit your ideas to a recording?

Miasmyr: Usually I record in a home studio and master the material in a professional studio. Recording at home gives me more time to work on getting the right sound and subtle nuances. On the negative side I would sometimes rather have a system running better and a limited timeframe can sometimes encourage faster production.

Miasmyr: I’ve been involved with other bands on the live front for quite a few years. After my output of recordings became more prolific with Moon the band I was in changed over to play those tracks. It was in a way a progression to the next phase in my mind idealistically. This was in part to streamline the output into something more raw and primal. I plan to always play live, it’s where one can connect most directly to an audience and it gives the music another facet. It’s hard to always get the sound we’re after at local gigs since the engineer doesn’t always know what we’re going for. Generally we play the more involved, less ambient tracks live to maintain a strong energy although we maintain its evocative and bleak sound.

(((o))): You are based in Australia, which has been steadily gaining attention in the metal community for the past decade or so for producing high quality metal bands. I personally remember the Pestilentia Australis compilation of Australian black metal bands being a sort of holy grail when I first began listening to the genre - featuring other one-man projects like Striborg and Elysian Blaze. Is there a reason in your mind that there is such a concentration of highly-regarded black metal in your country? Is there anything about your music that you feel is specific to where you come from, geographically or culturally?

Miasmyr: Australia doesn’t have a strong cultural past heritage like places such as Norway and Poland. Black metal doesn’t have a unified sound here as such. Geographically Striborg is in a very green part of Australia and he embraces that in his lifestyle and music whereas I use black metal as a means of communing with the inner world. My home town, Brisbane has offered some strongly unique bands over the past decade or so. From the retro thrash/black bands like Spear of Longinus, and Vomitor, to the obscure black/death of Portal and Impetuous Ritual, each band has something unique to offer and made a bold move to forge their own sound. In a way, not having a past cultural identity has given people in Australia more freedom to go their own way.

(((o))): Has your process changed at all since Moribund began to distribute your music and brought it to a larger audience? Do you feel like there are expectations put on you and your music that weren’t there before as a result of being heard by more people or is it easy to stay true to your original vision and creative process?

Miasmyr: Certainly the aim has been to find a label to fit the music, not the other way around. I’ll continue to do what I do whether there is much interest for it or not. I’m not always overly critical when writing material but when choosing what to be released I don’t want to add to the rubbish.

(((o))): What else do you want to accomplish with Moon? Is there a specific goal you’re trying to reach with your music or is it more of an organic, amorphous path for you? Can you think of anything that, after achieving with this project, would make you say “Okay, I’m done?”

Miasmyr: It’s an ongoing development; my ears and ideals change quite quickly and are somewhat ahead of what I release. I maintain my overall sound and vision though, I don’t think I’ll ever lose interest even when I reach my old man wizard phase therefore I’ll never be “done” with it.