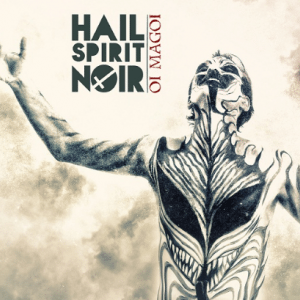 Out January 20th through

The problem of recording a second album is a complicated one mostly because there’s no formula for it.  While it’s easy for a lot of bands to try and recreate the sound of their first album, and this works a lot of the time (The Ramones did this successfully for three albums), others like to take the opportunity to go off the rails into a completely new direction. There is something to be said, however, for creating an album that takes the accomplishments of the previous and edits them for a more cohesive, streamlined sound.  This is what Hail Spirit Noir did with Oi Magoi.

With their debut album Pneuma, Hail Spirit Noir banked on the oddball premise that modern black metal shared enough of the spirit of the psychedelic 60s that the two sounds would meld together to create something new with a bold and exciting sound. This premise paid off in spades, and tracks like 'Let Your Devil Come Inside' were at once completely bonkers, undeniably exciting, and even catchy. Pneuma sounded like The Incredible String Band tripping in the woods with Marduk. Oi Magoi clearly has the same intent with a focus on refinement and tweaking rather than an overhaul of their existing sound.

The cover art alone provides a clear parallel to how the music in Oi Magoi relates to that of the album before it.  It references the art of Pneuma, the demonic smiling face as a full-body tattoo on an otherwise realistically-rendered man. The art is sophisticated especially in comparison to the art of Pneuma which has a madcap vibe to it that suggests a sort of gypsy spirit (or perhaps something scrawled onto an asylum wall). The music follows suit: tighter arrangements in place of ramshackle charm and a much greater ear for melody. Tracks like album closer, 'Oi Magoi' could be a hard sell on its own as being composed by a black metal band. Its throbbing organ coupled with everything from surf guitar to world music percussion blend into a lush fever pitch that remains grounded with a melodic through-line evoking traditional Jewish folk music. The most apt comparison might be to John Zorn’s Dreamers ensemble.

Other tracks take on a more sinister tone, specifically 'Satan is Time'. While it opens with a crystal clear acoustic guitar and harmonized vocals, not accidentally tipping a hat to Love’s Arthur Lee, it becomes a complex trip down its slinking bass line into a song that fully encapsulates Hail Spirit Noir’s vision. They allow their music to be pleasant, if only to allow for a more potent emotional spike as clouds darken and the song becomes a menacing chant, 'Satan is Time', again and again before blooming into full-on gravel-voiced madness. Similarly, centerpiece 'The Mermaid' marries this penchant for dense arrangement with the majesty of early prog bands; think King Crimson with its wobbling analogue synth. The band leaves room for several ideas and sounds to play to their logical endpoints in the tracks 11’29” run-time. As the track races toward its closing chords it reveals the ecstasy of playing what could have been an arena stomper in the early 70s.

While Oi Magoi is perhaps a more pure iteration of the direction in which this band will continue, and while aesthetically and composition-wise it improves on Pneuma, it is difficult to say that it reaches the same joyful highs as their debut. With the shearing off of some of the raw edges they once flaunted proudly, they’ve lost just a bit of what made their music so exciting in the first place. While the music is still decidedly weird, the band doesn’t seem like they themselves are weirdos. The music itself seemed to come from a sort of fun house dementia in Pneuma whereas now the music sounds like more of an intellectual study of the more bizarre juxtapositions of instrumentation and melodic ideas.

In the end, with Oi Magoi Hail Spirit Noir has given a great gift to the world of art-house bizarro black metal, a subsection of a subsection that is too rarely given new blood. My biggest fear is that one day their capacity to edit themselves will outweigh their capacity to fly the freak flag as high as they can, marching through the often too self-serious landscape of modern metal.