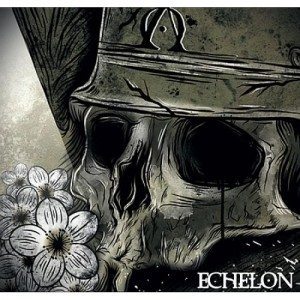 Out on January 24th through

Self-perception can get you in a lot of trouble. It’s important, of course, to reflect on who you are as a person and how you can most accurately present who you are to others. So often there is a distortion in how we perceive ourselves as opposed to how others see us, and this becomes a crucial point when marketing yourself as a band. Echelon presents itself not as a black metal band. On their website the band is described as “avant-garde black metal philosophers”. This sets up specific expectations going into a first listen of Vivito! Creato! Moritor!, that are unfortunately skewed from the start.

Avant-garde is about as loaded a term as you can use when describing music. Based on the nature of time alone it is unavoidable that as more people make music there have been more unique ideas expressed, and therefore it is always more difficult not only to define what trends are but more difficult to pinpoint who is creating those trends. The members of Echelon, by best available calculation, are in charge of their own marketing and have unfortunately put themselves in a difficult position. By self-appointing themselves as “avant-garde”, much less “philosophers”, they have put the pressure on themselves to prove a concept or an image rather than allow the music to speak for itself.

The big disappointment in this is that the music is very good, and I worry that first-time listeners will feel their expectations are not met. Each song has propulsion, leading the listener through the album at a fast clip from hook to hook. The vocals are often backed by group shout-alongs which are coupled with a driving rhythm section, giving the listening experience the feel of the gravity found in a great live show. Each instrument is given equal prominence in the mix and is clearly the work of a group with equal strength in all personnel. No one player steals the focus, giving the music an impressively muscular sound. 'Strappado' is an exemplary track showcasing the power of Echelon’s music, and it sounds like it would be most suitably heard in a sweatbox club surrounded by likeminded metalheads. There are plenty of melodic ideas at work and some truly gorgeous guitar lines which are elevated by rhythmic breakdowns and join-in-the-chant vocals. There are a few breaks in the pace, acoustic interludes with spoken word passages to more clearly showcase the ideas behind the album, and while the band would likely disagree these sound out of place and unnecessary. The slab of sound the rest of the album offers is weakened by these passages, even as I suspect these passages are the core of the band’s concept for the album - namely an interesting blend of art and human history, juxtaposing the works of Francisco de Goya and others alongside the long timeline of mankind’s war against itself.

The lyrical material here is dense but is frankly less interesting than the music as a whole. While the language barrier might restrict the listener’s enjoyment of an impressively curated and well-researched topic, it does not detract from the enjoyment of the music itself. This might be why the spoken word interludes are so distracting.  Especially when the album tears into a song with as much passion as 'Die Grauen des Krieges', it seems like the interludes beforehand are obstacles standing in the way of moments of potent songwriting and emotional heft. Metal can certainly be deep and artistic, in opposition to many outsiders’ misconception of mindless headbangers and the societal fringes, but this album seems to succeed most in its moments that allow the listener to escape to a place apart from the intellectual realm where melody and passion have greater power.

The minds deemed avant-garde have always been called such by contemporaries, and it is a difficult distinction to prove when placed on one’s self. The truth is that this music is not avant-garde at all, and it doesn’t have to be. This is simply very good, extremely melodic black metal. It is well-crafted, gorgeous, and often emotionally moving. It does not need to try and be anything more than that, and can only complicate itself with such weighty terminology.