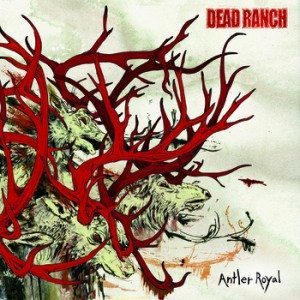 Out now through Bandcamp and No List Records (vinyl)

Canadian four piece Dead Ranch were established in 2011, in Winnipeg, and this is their first full length release, Antler Royal. Recorded with Jesse Gander (Anciients, Bison B.C, 3 Inches Of Blood, Mass Grave), it’s a debut that sounds like a band that have been honing their craft for way more than the few years they’ve been together. A true statement for a tight-as-fuck, down-tuned colossus that will leave you with a huge grin on your face, and the fear of god in your eyes.

Opening track ‘Ice Desert’ starts as a beast that’s just awakening, with a single guitar slowly introducing the rest of the band into the fray. Layer upon layer builds up until the monster has now arisen, and is ready to drag you through just over half an hour (8 tracks) of pure brutality. And after the dust settles and cities have fallen – you’ll be back for more.

There’s barely even a second to think about what’s just happened to your brain before ‘Attack of the Sky Creatures’  knocks you back off your feet and continues to pummel your ears with ferocious beats and animalistic gut wrenching vocals. This is a finely produced album, no instrument taking charge – it’s an attack on the senses from all sides, and the duel guitarists fight alongside (not against) each other like their life depended on it.

What about the bass? I’m a huge fan of a dirty, low end distorted bass, and ‘Mudwalker/River Drinker’ more than quenches my thirst, as does ‘Water Park Shark’ with riffs so ugly, they’re god damn beautiful .  Tempos change in a heartbeat, and the melting pot of genres throughout is a testament to a band that have definitely spent a lot of time playing together, making sure that their debut is one to remember.

The final two songs are two different entities altogether, but the end result is still the same. ‘Larry Beastman’ is just under three minutes of being suckerpunched repeatedly and rapidly, the most punk rock track on the album for sure. And twice as long as that is ‘Le Petit Mort’, finishing off whatever sanity you may have left with a sonic steamroller dragging you slowly over a freshly tarred road.

You’d be doing yourself a huge favour by getting this album right now, one of the most amazing debuts my ears have had the pleasure to hear. Heavy as fuck, with  some of the best song titles and album artwork your eyes will ever see.