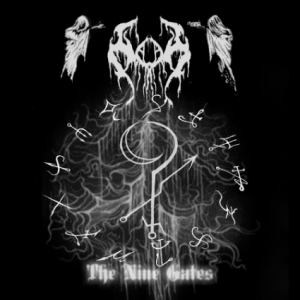 There are two camps in the world of black metal right now. One camp is a product of the “mashup generation”, gleeful mad scientists crossbreeding genres to see what they can shape from it. The other camp, decorated with two severed goat heads on stakes, houses your black leather revisionists who want nothing more than to keep the beats blasting and the guitar-picking tremolo’d. Each of these camps has something to offer when done well, and neither can objectively said to be “better” than the other one. One camp swears allegiance to the sound of black metal, the other to the drive to create something new from the structures black metal provides. I use this sort of “black metal theory” to describe the current state of the genre, and it fits everything into neat categories which are easy to discuss. Then a band like Australia’s Moon comes along that accomplishes something so singular and with such a pure intent that it totally destroys my model and makes me have to remember that this is black metal we’re talking about: it’s not going to be easy, and the pieces aren’t always going to fit nicely.

At first blush The Nine Gates seems to check all the boxes of a Moribund Records’ release and fits alongside the label’s former staples Leviathan and Xasthur. You can hear that same type of atmosphere at work right out of the gate, as opener ‘The Rejection of Flesh’ drones and chimes to lead you, dread-filled, into the churning and cavernous ‘Inhale Darkness’. The instrumentation is familiar in its form and arrangement. A consistent simple drum beat leads the march through the song as layers of guitar and keyboard create a dizzying cloud of sound through which you can barely discern the vocals of Miasmyr - Moon’s sole creator and instrumentalist on the album. The effect is not something unfamiliar in this type of music, something akin to being lowered into the grave. This image is reinforced as keyboards create an almost choral effect as arpeggios descend at a funereal pace. This is just a snapshot of one song among eight others, though, and this is not an album that can be taken in a track at a time.

In a world that’s increasingly reverent of “singles”, even when that word becomes more useless in describing how music is distributed and consumed, an album that rewards the listener for taking in the work as a whole stands out. There is certainly emotion and expression, but there’s also an ideology at work from the opening notes to the final fading echo. Moon describes its lyrical themes as based on the occult and the symbolism of lunar cycles, themes that clearly do inspire and inform Miasmyr’s creative output. For the listener, however, those lyrics are hidden by vocals that are intentionally washed out to surround the music itself and they in fact become another facet of the mist-like atmosphere that pervades the album. The ideology Miasmyr propagates is therefore one communicated through sound and presentation alone. The Nine Gates takes on several forms then: as a collection of songs, as one piece with a consistent through-line of sound and philosophy, and at times as a structured piece of theater.

The climax of this drama seems to be reached, a “false ending”, in the second-to-last track ‘Spiritless Winds’. It could easily be the final track of a similar album as it creates a complimentary book end to the droning ambiance found in opener ‘The Rejection of Flesh’. With stunning album closer ‘Gate of the Moon’, however, Miasmyr makes it clear that ‘The Rejection of Flesh’ is just one last return to some sort of familiar structure before a complete take off into the album’s longest and most successful track. ‘Gate of the Moon’ is a crystallization of the tracks before it, and it is given more punch when juxtaposed with the trudging moment of eerie calm before it. The send-off track fully showcases another element that is hinted at throughout the rest of the album, especially the organ-heavy ‘Sabbat’. There is, amongst the muck and mire of the oppressive gravity of these songs, a feeling of triumph that is merely hinted at until the bombast of the final track. At the end of an album that has felt like a consistent, inevitable downward journey, the end is an ascension that is sudden and propulsive. What could be the final act of a long march sounds more like being granted entry into the full cosmic potential of Moon’s sound, and it is a moment made all the more ecstatic by the path which precedes it.