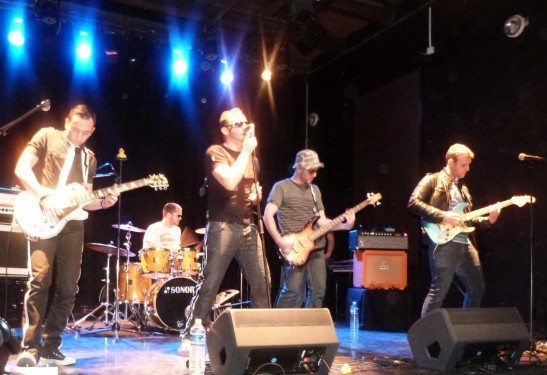 Last week Gary Jackson reviewed the debut EP Zebra Pilot by French rock band Duck Explosion. He was so intrigued by the name that he wanted to find out more, so read all about exploding plastic ducks and French rock music.

(((o))): Hey guys, thanks for doing this interview with us. Can you give us a brief background introduction to the band, like who is who etc?

Wil: Thanks to you and thanks for the great review! We really like it! My name is Wil and I'm the cofounder of the band and I play guitar. Duck Explosion was created by two friends and roommates Jey Bridge and myself. A common passion leads us: ROCK!! 70's rock for one for one and more alternative rock for the other. We create the alchemy, which gives its foundations to the band. Charly Poppins, a singer with heavy metal influences who marks the songs by his hoarse and energetic voice, then joined us. Later we were joined on the bass by Saraswati Inthesky, who is an arranger and a composer of harmonious tones, and finally by drummer Luca who quickly learned to hammer the rhythms of Duck Explosion.

Wil: We created the band in March 2010 in a little town. We worked very hard the first year, so we created many songs, and at the end of the first year we decided to play live! The second year we played approximately 40 concerts everywhere in France (Marseille, Paris, Avignon etc.). We learned a lot in this year, but something was missing, which was a release. So we started to think about our first EP Zebra Pilot around September 2012, because we wanted to push our music to another level for our fans. In January 2013 we started to work very hard on the EP and we were back in the studio in April 2013. We finally released Zebra Pilot in October 2013 and now I’m here answering your questions.

(((o))): So fellas, Duck Explosion, you indicated that there was a story behind the name. What’s the story?

Wil: Well, for my roommate’s birthday in August 2010, I bought a gift and it was a plastic duck that used to light up when you slapped it. He decided to put this duck in our rehearsal room, and when we played very loud the duck used to make some lighting and I think this thing then began to become our emblem so we want a name with duck! The ‘Explosion’ part of the name came from the band Jon Spencer Blues Explosion as all the members are huge fans of Jon Spencer so we decide to put ‘Duck’ and ‘Explosion’ together. And at the end of every show we explode a rubber duck!

(((o))): What are the bands influences, musically and outside of music?

Wil: With 5 members with 5 different influences Duck Explosion is a mixture of all these influences. For me it's clearly The Strokes who are my influence for everything, my songs and the sound of my guitar! Charly is a huge metal fan, Jey is really more a 70's rock fan like KISS, Led Zep, and Saraswati likes the alternative stuff like Sonic youth, Dinosaur Jr etc. Our drummer Luca listens to Nine Inch Nails everywhere and all the time, I think at this point it's actually a disease (just joking!).

(((o))): I had written in the EP review that the band were kinda like post-hardcore, is this a fair reflection of the band’s style or would you place yourself somewhere else style wise?

Wil: We don't usually ask ourselves this question as I already said that Duck Explosion is a mixture of different influence and I hope we sound like Duck Explosion. As for the style everybody can hear something different! We basically play Duck Based Explosive Rock!

Wil: France is not a rock country, so we try more and more to play outside our own country like playing in Germany and all of the United Kingdom but it's a big thing to organise. So it's hard to do something with this type of music in France. Fortunately some people like Christophe Sousa from Dooweet help the band a lot.

Wil: Montfavet near Avignon last September 2012 was a great venue with a great crowd and it was a great show I think. It was a really special show for me personally because one week before the gig I lost my dad, so it was a really emotional concert, but he give me the strength for the show and lot more.

(((o))): Zebra Pilot was a four track release, have you any new material recorded or plans for a full length album?

Wil: We start to think about a six track EP for 2014 and certainly an full length album in 2015. We currently have 15 songs in the planning.

Wil: To play in London at some point would be a dream coming true for us. Besides this to travel for gigs, making some good records, play a lot and most importantly to have a lot of fun with our music. Basically what all bands want I think, but we always keep finding ways to think about our music, as it's maybe the most difficult thing to preserve with the music when you've got some success.

(((o))): Have you any gigs or tours that going to be taking place now or in the future?

Wil: We are playing on January 25th at Orange, which is a nice town. And a lot more gigs are coming quickly. We have our song ‘In the inside’ on the War Machine compilation Dooweet is putting out in the beginning of 2014, and we’re planning to shoot some videos, so stay tuned.

I really enjoyed answering your questions and I wish you all the best. Hopefully we will see you at a future gig!