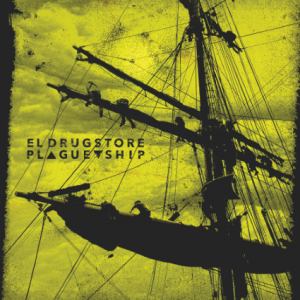 Out on December 31st through

Seeing as December in music world is dominated by Best Of lists the organiser of this release is either a fool or comic genius for deciding that Plague Ship “will set sail on the last possible fucking day of the year, December 31st”.

Formed from current and ex members of East of The Wall, New Jersey based three piece El Drugstore bring forth their brand of “Instrumental Freak Attack” on their debut album the aforementioned Plague Ship.

Any self-respecting fan of the RIFF should definitely point their ears in this direction and ignore their press description lauding it up to the point of overbearing grandeur with the following blurb:

“The swagger of their jacked-up anti-capella songcraft unloading a dizzying array of awesomely head-scratching jam-outs. Amplification runs rampant, propelling the massive array of effect/pedal-laden spazz-riffery through the pummeling percussive whiplash without a whiff of spitty breath to be found.”

“The results resemble an abortive version of The Fucking Champs deconstructing Cave In and Cynic in an echo chamber full of copulating shrimp and LSD, to those daring enough to take a dip.”

So what we actually get are 10 concise, sharp and stunning instrumental stoner/progressive rock RIFF workouts in the style of Astrohenge and Russian Circles, wrapped up in an implied improvised psychedelic jamming session as seen in Earthless records.

And it’s just as fantastic as those references dare too imply, providing a 45 minute cavalcade of RIFFS, time signatures, fantastic musicianship and hooks that can either be enjoyed as one whole movement or as individual moments.

And each individual track certainly contains more ideas on their own than most bands whole albums, and it’s pretty tough to pick out an individual track for recommendation or description as there is so many different elements hitting you at once but I’m recommending ‘By What Ill-Gotten Means Have You Procured This Meat?’ because it’s an amazing song title.

All three band members are on top of their game and importantly for this style of music are given equal creative platforms so although the guitarist weaves his magic upfront, the bassist and drummer are especially noticed showing of their own talents throughout. 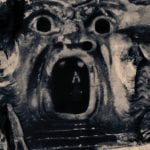