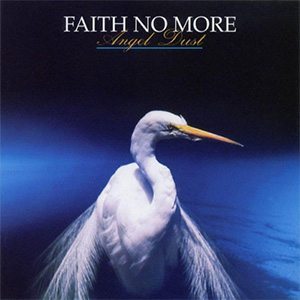 When asked for an album from the past that means something special to me and that has had a particularly dramatic impact on my life, there can still only be one answer, even twenty-one years after its release.

As an eleven year old I had already heard Faith No More’s previous album The Real Thing in 1989 and, despite my Metallica / Guns ‘n’ Roses friends thinking it was nothing more than “funk rock shit”, I took a shine to it and couldn’t wait to see what they did next.  What they did totally blew my tiny little mind, whilst simultaneously splitting the critics as to what alternative music really was.

After the success of said former album, it took a while for the band to return, but return they did with nothing short of a multi-genre-headed beast, with both middle fingers stuck out to everyone, including their own record label. Angel Dust, the second album featuring operatic/jazz/metal/lounge singer Mike Patton had me confused, scared, salivating, excited and everything else in between.

Tracks as heavy and disturbing such as ‘Caffeine’ and ‘Jizzlobber’ sat next to piano-led ode to redneck suicide ‘RV’ and 70s  drug-fueled detective theme ‘Crack Hitler’ like awkward cousins. Meanwhile, with ‘Midlife Crisis’, ‘A Small Victory’  and ‘Everything’s Ruined’, the band proved that they could still knock a single out of the ball park.  Add covers of John Barry’s ‘Midnight Cowboy’ & and The Commodores’ ‘Easy’ into the mix, and you have an album that to this day can still be difficult to listen to all the way through, but is oh so rewarding for doing so.

Unfortunately, this was the album that saw ‘Big’ Jim Martin leave the band due to many fall-outs over pretty much everything to do with the album, including Patton having more creative input than usual.  Martin, along with Messrs Roddy Bottum, Billy Gould & Mike ‘Puffy’ Bordin had written all of The Real Thing, with their new frontman just writing lyrics. This was something else completely.

Two albums later (King for a Day, Fool for a Lifetime and Album of the Year), the band called it a day in 1997. Both these records were great follow ups in my opinion, but nothing near the beautiful ugliness of an album that led to me getting involved in bands and promoting shows from 1996 onwards.  I’m listening to this now as I write, and I can’t think of any other album that has changed the landscape of alternative music the way that Angel Dust did for me, and for that I am eternally grateful. Just don’t get me started on that ‘comeback’, that’s for another time…