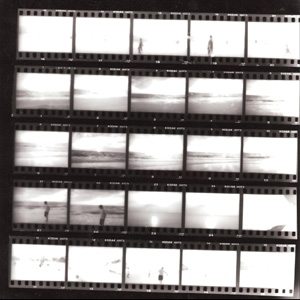 Out now and available through

Many bands are content to recycle standard post-rock tropes while offering little in the way of originality, but occasionally a band will come along with a genuinely new take on the genre. With the return of Godspeed You! Black Emperor, and bands such as Russian Circles and genre pioneers Mogwai still releasing vital new music, there's really no room in the game for complacence. Unfortunately Massachusetts' Glacier fail to raise the stakes.

The production quality of the album leaves a lot to be desired, but when you take into consideration that it was tracked live in the freezing basement of a church, the rough edges can be forgiven. The drum sound has all the impact of a stroppy teenager punching a pillow, and during the build-ups, they even sound a little like the whumpfs of helicopter rotor blades in a bad action movie, sitting far too close in the mix as they do. All the players involved here clearly have talent and chops, but this recording does not allow them to fully demonstrate their abilities. Given the breathing space in the mix that their chosen genre requires would completely transform these songs.

'For The Hour To Reap Has Come' opens with a sample of 9/11 conspiracy theory, sounding as if it's being played over a PA system in the distance as the band slowly builds tension. Between the choice of sample and the sparsity of the chiming guitar, it gives the intro an eerie edge. When the full band comes crashing in, it's with an almost post-hardcore intensity. Things die back down again throughout the track, before building to the familiar post-rock crescendo. When it finally erupts, it's the aural equivalent of harsh sunlight on a cold, changed world. Considering the subject of the sample that opens the track, that may be the exact intent; the world changed for everyone on that day.

The shimmering guitar motif that ends the first track leads into the second, 'And We Couldn't Fit Another Soul', soon joined by a cyclic riff and the pounding of drums. I know that long drawn out songs are common with this genre, but it feels like it goes on a little too long, and veers dangerously close to uninspired repetition.

With a mournful tone set by the rattling of strings and distant keys, so begins 'Death In The Afternoon'. It's a beautiful song, the chiming guitar ringing out clear through the mix, and when the enormous drums signal the beginning of another climactic build-up, the vibe of the track is then completely abandoned in favour of a fuzzed-up Pelican-esque climax. Not saying it isn't good, just a little ill-fitting as a conclusion to this particular track.

'Burns What Life It Has Left' is another track in need of some variation; the main guitar motif is excellent, but loses it's charm after the hundredth repetition. Closing with 'Eventually All Becomes Routine' the interweaving guitars and understated cymbal taps of the drums create an elegiac beauty, before they crash into yet another crescendo. It's an overplayed card in the post-rock deck, but it can still surprise you with the sense of catharsis it inspires.

Despite lackluster production values, the ideas present here and their delivery are excellent. Given ample time to mature and the opportunity to record with the right producer, Glacier could become a majestic force within the post-rock genre. Unfortunately with Concave, they're not quite there yet.