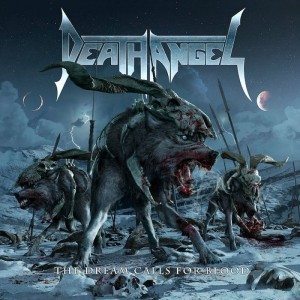 I've always been a fan of thrash music, ever since I was a young 'un. Much like the premier league there was the big 4 and then everyone else. Death Angel obviously fell into the everyone else category but for me they were not far off the top. I first heard them in 1990 with the absolutely awesome Act III album which was a great blend of thrash with loads of funk stylings it really did kick ass and still to this day is an album that stands up really well. As the musical landscape changed along with my musical tastes the obsession with only thrash changed along with my music collection, I admit I didn't keep up to date with the thrash movement apart from the big guns. So I was quite surprised to see the new offering from the Death Angel camp The Dream Calls For Blood up for review so I snapped it up quick sharp for review before anyone else got their paws on it.

There has been some line up changes in recent years with only Rob Cavestany on guitar and Mark Osegueda on vocals being the founding member and longest serving of the guys with Ted Aguilar on guitar joining in 2001 after the band reformed after a 10 year split. The addition of Damien Sisson (bass) and Will Carroll (drums) both in 2009 has remained the line up and seems pretty stable. So on to the music and having great memories of the previously mentioned Act III album I was excited to check it out.

'Left for Dead' opens the album with some clean arpeggio's before BOOOM!!!! powerful speed riffing aplenty with great drums whammy bar solo's and great vocals. In short this is a perfect opener and is proper thrash just the way Death Angel do it. 'Son of the Morning', 'Fallen' and the title track 'The Dream Calls for Blood' and 'Succubus' are next and the guys prove that power and heaviness can be achieved without the need for drop C or B tuning as these songs are HEAVY as shit and faster than a speeding bullet. 'Execution / Don't Save Me' is next and starts of as if it is the ballad type track, luring you into a false sense of security before the power riffing kicks in and rips your face clean off your face. 'Detonate' proves that Death Angel can give something slightly different but still be Death Angel. The album closes with 'Territorial Instinct / Bloodlust' a slower tempo number that still retains its power and heaviness. Overall the album has all the hallmarks of a great thrash record, precision playing in all areas with Mark's clear, powerful vocals.

The Dream Calls For Blood, simply put is just a great album that proves that the guys still have it and in my eyes still deserve a top place in the league of thrash. No compromise and no changing the style to fit the fads. Death Angel have delivered great music here and with this album at least one of the 'big 4' would need to watch out as their place is under threat after hearing some of their recent musical output. Know what I mean Dave.