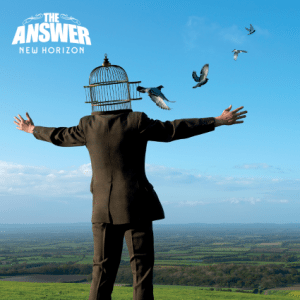 The Answer seem to have been a busy bunch of lads recently. The last I seen them they were strutting their stuff in Dublins O2 in support of the mighty AC/DC’s Black Ice tour. This to me seemed like a double edged sword, on the one side you get to tour with one of the biggest rock ‘n’ roll bands on the planet and get to play in arenas full to capacity. The other side to this is you know that every single person is waiting to see Angus strutting his stuff for 2hrs so you need to put on a good show to get yourself noticed up there. From what I seen that night The Answer gave a really good account of themselves and had plenty of heads rockin’. The guys have more recently had a label change to Napalm Records and been beavering away on the road and in the studio.

From these endeavours the band have delivered New Horizon the latest album produced by ex-Little Angels frontman Toby Jepson and mixed by Mike Fraser and going on the first few listens of this bad boy and I gotta say it is pure unfiltered Rock ‘n’ Roll. There are plenty of great grooves and riffs on this album to get the head nodding and the body movin’. The guys have learned a lot from the constant touring as the playing on New Horizon is really tight and the songs are really well constructed with flawless musicianship.

Of the 10 tracks on offer the stand out tracks for me are ‘New Horizon’, ‘Leave with Nothin'’, ‘Somebody Else’ and ‘Burn You Down’, however, saying that all the tracks on the album are so strong that the songs mentioned were just my personal favourites and there are no weak songs on the album which invokes that old cliché ‘all killer, no filler’, which just so happens to be true of the what New Horizon and the guys have delivered. All the playing on the album is absolute quality and in particular Cormac Neeson has a set of pipes on him that is invocative of Plant, Gillian et al.  The Answer have done themselves proud with New Horizon and I’m sure this will lift them up to the levels that they deserve. This stuff is pure, unashamed, gritty Rock ‘N’Roll with no apologies and this is no bad thing. Good luck to the guys with this album as the fully deserve the recognition for it. Special note on the surreal album cover as well as it was designed by the late Storm Thorgerson (Pink Floyd, Black Sabbath, Led Zeppelin, Muse, Biffy Clyro) and I’m sure there is plenty of meaning to it.

I would recommend checking the guys out on the 40 date tour which has started as these songs demand to be heard live and loud. So to sum it all up The Answer have delivered a balls to the wall, shit hot rock ‘n’ roll album in New Horizon with grooves a riffs aplenty all topped off with Cormac’s classic vocals. If that’s your kinda thing you will like this a lot, I know I did.