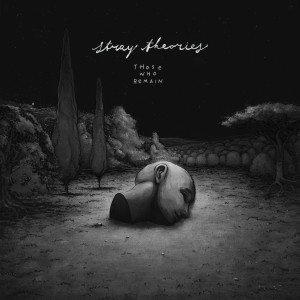 “This band makes good sound!” This was a comment that a friend of mine left on a song I posted days ago on a social network . The song was ‘The Day We Were Silent’ from Stray Theories. And my friend has a great taste in music!

Stray Theories is the electronica and ambient solo project of the New Zealand based and Australian musician/composer Micah Templeton-Wolfe. Those Who Remain is his new album that arrives just one year after the excellent LP Even Though We Sleep. With its soft combination of warm ambient music, emotional and melancholic piano work and modern classical aesthetic, Those Who Remain is a wonderful follow up to the previous album and absolutely a pleasant and rewarding listen.

“A growing-up of dark malignities can at times turn into something bright”. The meaning of Those Who Remain is in this statement you can read on the Bandcamp page of the author and you can immediately get an idea about this new music collection and about the emotions it can provoke.

Those Who Remain is a soft and inspiring music journey and, despite the alternation between dark and light notes, the dominant feeling is pretty ethereal. The perfect blend of the warm piano work with the cinematic ambience is a work of art and puts immediately Stray Theories on the same level to the best of Brian Eno and Jon Hopkins.

Those Who Remain consists of eight tracks spread across more or less 45 minutes, but all together these songs are like a big composition and you don't really know where one ends and another begins. And it doesn't matter. The predominant sensation is like moving in a unique space able to assume different configurations because each song has its own character and subtle patterns sometimes emerging from the randomness.

‘The Day We Were Silent’ opens up the album and together with ‘When You Return’, the first two songs represent a great intro to this beautiful musical journey. As soon as you’ll press play you’ll get the impression to open a window over the beautiful landscapes of New Zealand. But don’t confuse them with simple and static postcards. Everywhere there’s a sense of melancholy that makes everything more intense. Especially the second track has a beautifully constructed sense of regret and loss.

The tension of ‘Remembrance’ is notable and I particularly enjoy the melancholic sense that permeates the beautiful ‘Promises’. These songs are the soundtrack of each moment of your daily life. They are intense, dramatic but always with a light at the horizon. And this is the motive of the whole album – the sentence I mentioned is the guideline to this deep musical journey – as you can notice also reading the sequence of the song titles.

The following ‘Exposure’ follow the same pattern of the previous songs creating, all together, the dark and dramatic side of the album. ‘Divisions’ is the point where the New Zealand artist turns “the malignities into something bright”. ‘Divisions’ is a beautiful piano song where Micah blends the keynote with soft electronic beats to create a notable cinematic atmosphere.

A wave of light arrives with ‘Signs Of Life’ and ‘All I Know’ where elements of ambient, electronica, and modern classical are all blended together seamlessly in well crafted arrangements with a sweet melancholic undercurrent. I do love ‘All I know’.

In the last 12 minutes of the album Stray Theories turn each dark corner in spaces full of light where interesting things may or may not happen and its lack of direction is in its own way brave. Sometimes it's hard to not say anything. Micah Templeton-Wolfe is able to do that and in a beautiful way.
Highly recommended!