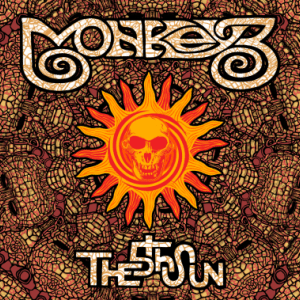 Firstly, this is not going to be a particularly objective review as I have loved everything Monkey3 have ever produced. So with that caveat in mind, read on… Hailing from Lausanne, Switzerland Monkey3, if you’ve not heard them before, play heavy psychedelic /atmospheric instrumental tracks with progressive flourishes. Their last album Beyond the Black Sky released in 2011 completely blew me away and it’s true to say that The 5th Sun (shouldn’t this be the 4th Sun, after all it is their fourth full length release?) and their first on Spinning Goblin Productions/Napalm Records, is even better! How the guys manage to consistently create such quality is a mystery?

For the new listener this album is as good an introduction to the band as any. For collectors there is a limited first edition six page Digipack which includes one extra bonus track. The six songs the standard release contains are a spaced out mixture of Porcupine Tree and God is an Astronaut, with a few stoner type riffs thrown in for good measure. As each track is an instrumental then it could easily pass for a movie soundtrack, perhaps for a big budget sci-fi movie. The album starts with a 15 minute epic, ‘Icarus’ and this sets the scene for the rest of the album. The driving passion and force behind the playing is intense and this huge track expands in such a way that 15 minutes doesn't feel long enough. Other bands would have perhaps made two or three songs out of this one song, but Money3 are brave and talented enough to let the music take its course. There’s even a spoken word section in it.

As the album progresses each track provides something focused and relevant to the overall feel and ethos of the record. Every track on this album is blockbuster material which encompasses tranquil passages all the way through to heavy unrestrained metal. Time signatures and tempos constantly keep the listener interested and new ideas and instruments are introduced where necessary. I found that synths and keyboards seem to play a larger part for the band than in previous releases. For example, while all tracks follow the same pattern with subtle variations if needed the introduction of old-school Deep Purple organs along with sections which are on the verge of being classified as jazz manage to add unexpected diversity. The album concludes with an eight minute killer song ‘Circles’ that brings The 5th Sun to a great close.

In summary, this is a band that has perfected their sound. With this album Monkey3 fans will be pleased and new listeners will be delighted that they’ve discovered such an awesome group. This is breathtaking stuff and I demand that the band now gets some well deserved recognition! Oh, and does a full UK tour too.