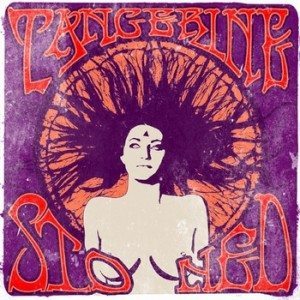 I have a really complicated relationship with The Doors - I love them, but I also roll my eyes at some of the ‘poetry’ for which Jim Morrison was so famous and lauded. My favorite example is from ‘Riders on the Storm’, in which "there’s a killer on the road, his brain is squirmin’ like a toad".

That, my dear friends, is lyric!

I had to take that potshot at The Lizard King, but the reason I have occasion to bring up one of the best bands of all times, is that Italian band Tangerine Stoned have made a bluesy, psychedelic album on par with some of the best from the height of the genre, circa 1967. And yes, at times, this album is very much a Doors-ian trip. Young Doors, though, not bloated, alkie, bearded-to-hide-the-double-chin Morrison Doors.

Just to be totally clear, I read the press release notes for the Tangerine Stoned album, and it specifically mentions The Doors as an influence, but also mentions such heavy-hitters as The Seeds and 13th Floor Elevators.

I am way more familiar with The Seeds than the 13th Floor Elevators, having bought A Web of Sound for mere pennies at a junk sale when I was about 12. My dad, the man that has been the biggest single influence on my musical tastes and all, laughed when he saw a Seeds album, but as always, let me figure it out for myself. The Seeds were campy at best, but they were the epitome of the pipestem trouser, page-boy hair, peasant-shirt-with-vest image associated with their ‘scene’, man.

Let’s just say this: Tangerine Stoned is way better than The Seeds could ever be, closer to being as good as The Doors.

The opening track is ‘Venice’, which is likely an homage to the beach of the same name, the beach on which Jim Morrison and Ray Manzareck (may he rest in peace!) met. This number is bluesy and funky, with sort of haunting vocals. Or maybe it’s about the Flooded City (since these guys are Italian) - Either way, it’s a pretty rocking track. ‘Clean Window’ is more of the same, very smooth, very ‘60s, very ethereal in parts. This track also showcases more vocal range, and some cool-sounding guitar riffery. I think that the mish-mash of clean-sounding and distortion effects on the guitar make this one my early favorite.

‘Blues in Door’ starts off with some Keith Relf-style mouth-harp (that’s what we cool folks call the harmonica) in this rollicking party track. This song reminds me of movies like ‘Coogan’s Bluff’ in which the Psychedelic scene folks are portrayed as crazy, drug-addled, Hammond-playing weirdos. I dig it, man! The harmonica in this mostly instrumental track is cool, and there is a really funky bass almost-solo as well. Anyone up for the Pigeon-toed Orange Peel for a shroom cocktail tonight?

‘Dirty Ceiling’ expounds further on the Hammond organ, and is so similar in style to The Doors, vocally, that it’s almost too close. I am quite impressed that this vocalist’s first language is not English, yet he totally nails it throughout.

I feel like I have to mention the drumming, as well, to be totally fair - it’s solid and not overpowering, and these guys are pretty tight. I get the feeling that they really know what they wanted things to sound like and maybe whomever did the mixing as well - nothing seems like out of place or overdone.

‘Nave Da Bar’ is a bit faster, but more of the same coolness. Swirly guitars and ‘Light My Fire’ organs underneath it, with a cool couple of bass/drums moments mixed in. I’ve got no idea what the lyrics are or what they might mean (something about magical and mystery?), but the delivery is cool and enjoyable. The singer could match Ian Astbury note-for-note in my book.

The last track, and a long one at over 11 minutes, ‘L'Urlo della Strega’, has some Sitar at the beginning (or emulated Sitar?), and I’m frankly surprised that the song is not exactly 4 minutes and 20 seconds long (see what I did there?). It’s a bit meandering for me at the start, as a dude that is not a poker of smot any more, but again, it’s a cool track in the same vein as ‘Riders on the Storm’ or similar.

During my research, I happened to have read another reviewer’s take on this album, and he wrote something like these guys have stayed more than one night at the Morrison Hotel, and goddamnit! I wish I had written that!

Tangerine Stoned’s Facebook page is in Italian, so I don’t know much about them at all, but I am really pleased that I was able to review their self-titled effort. These are some solid musicians that play some pretty good, nostalgia-friendly tunes. And with a huge hole left in the world of music with Manzareck’s passing recently (and I am being totally sincere, I loved hearing him talk about music and such), there is even more room for such an homage to a group with whom I have such a complex relationship. Cheers, Gentlemen! Or maybe ‘Saluto’? Either way, nicely done.