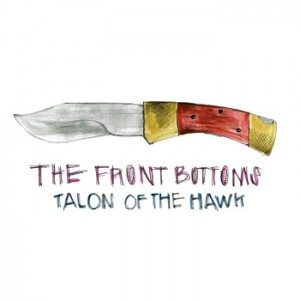 Talon of the Hawk is the new album from New Jersey’s The Front Bottoms and I just have to say straight off the bat that this is a great name.  I think that it will probably throw up a few barriers for the band but a great name none the less.  The band consists of Brian Sella (vocals/guitar), Matt Uychich (drums), Tom Warren (bass) and Ciaran O'Donnel (keys/trumpet/guitar) and ‘most of the album had been written during touring from last year’.  Another band that I had absolutely no clue about and once again another band that I am sooooo glad that I did.  I have heard a few albums already this year that I would definitely be touting for my own personal album of the year and for sure Talon of the Hawk is gonna be right up there.

The songs are so well constructed and so damn catchy they hook you in right from the first listen and it’s not long before you are singin’ along to the likes of ‘Au Revoir (Adios)’, ‘Peach’, ‘Skeleton’, ‘I Swear To God The Devil Made Me Do It’ and my own personal favourite ‘Lone Star.

Not only are they catchy as hell, some of the lyrics are so poignant but also tinged with humour, albeit the darkest of humour.  For example the aforementioned ‘Lone Star’ seems to be about a relationship between boyfriend and girlfriend who are pregnant and end up having an abortion, and the relationship after this event.  This is powerful, deep material but the delivery of the song makes you sing away without a care in the world.  The personal style lyrically reminds me of the likes of Rivers Cumo and Weezer and in particular the Pinkerton album, not musically, but lyrical content and the way it’s brilliantly sang by Brian.

The guys also have delivered a really polished production on the album as everything blends well in the mix and every single part is so crystal clear, it is an excellent job.  As I said before the songs are really well crafted and according to the band “It has become so much of a lifestyle at this point. It's not our jobs, hobbies, nor our obligation. It's just who we are” when asked about what The Front Bottoms means to them.  The songs are played by a band who are tight and you can tell that the songs where nurtured on the road and not just thrown together in the studio.