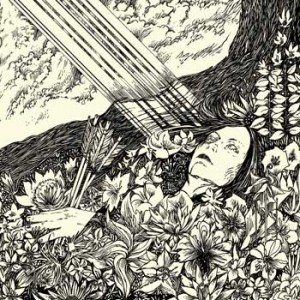 Out on June 15th through

On Blood Moon Rise Jex Thoth take the bluesy, psychedelic laced doom from 2008’s self titled release and turn it up a notch. What I find a bit more striking though is that although it is turned up, it has restraint in all the areas it should. There are no marks of overindulgence, no wasted time on the tape.

Take opener ‘To Bury’, a gorgeous melodic affair filled with Jex’s own harmonious vocals. Any average band would have milked the track for longer that 3 minutes, but Jex have no reason to. They know the statement is there. Their intent is delivered and felt. ‘Into A Sleep’ is another slow song, rife with blues licks and echoes all the hell over. You wouldn’t be off in hearing this song performed in a smoky club in downtown Chicago in 1973.

Don’t fear for your love of the aggressive side that Jex bring, though. ‘Ehja’ is has enough wailing guitars and feedback to keep you fed for days, and ‘The Four of Us Are Dying’ grooves with the energy of a band fresh out of the practice space; doomed the hell out and shaking the floorboards. The flashy but not overdone ‘Psyar’ gladly winds down the album as a journey through rock ‘n roll as you always wanted it to be, but never was, and a thick slab of doom spread all over it. Born too late indeed.

Doom, sludge, psychedelic rock…whatever the hell you want to call it, this album is nothing short of amazing. I foresee (and hope) this album on some year end lists. And rightfully so, there’s not a flaw to be found and it sounds perfect through and through. Be sure to grab Blood Moon Rise from I Hate Records on June 15th. And buy a copy for a friend, they need to hear this album too.

Support artists and musicians you enjoy, buy a record or go see a show.