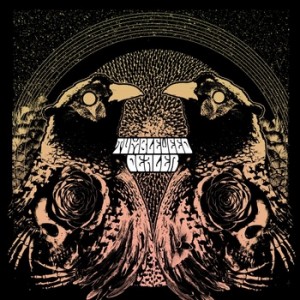 Tumbleweed Dealer are in the stoner/dessert/sludge rock category according to their Bandcamp and Facebook pages. I'm no expert in any of the above so wouldn't be able to tell my sludge from my dessert from my stoner. My only real exposure to this ‘genre' of music would be Kyuss, Monster Magnet and possibly some Clutch all these bands I really like, so I was really looking forward to getting the cans on and slip sliding into the groove.

First off the Album Cover for Tumbleweed Dealer has a very 70's psychedelic feel and really does set the tone for the music that the duo from Montreal, Canada serve up for their debut. Getting into the music, it really does lean into the stoner/desert realm with song titles such as 'Opiates', 'How To Light A Joint With A Blowtorch', 'The Sacred Mushroom And The Cross', and 'Sons Of The Desert'. Stylistically the overall feel for the songs is definitely slow groove based riffs with a real feel for improvisation and jamming.  Think early Sabbath slowed down, real heavy riffs enough to shake the head, brain, in fact the whole street. Some of the songs on offer are epic ranging from the 5 minute 30 to the 9 minute mark and all with a hypnotic effect  layers of guitars all playing a slight variation on a theme. As good as the riffs are I think the tracks could use some vocals in the style of Neil Fallon which would really take everything up a notch. For me the best track on the album is 'The Sacred Mushroom And The Cross' which actually changes tempo during the song and really shakes things up. A few more tempo changes in the songs and Tumbleweed Dealer wouldn't just be a good album, it would be a great album.

So I'm still no clearer on how to define the genre that Tumbleweed Dealer would fall into but suffice to say that the guys deliver a powerful album loaded with great big slow heavy riffs all wrapped in a psychedelic jam packed goodness. So if you like any of the above bands or genres then you will definitely like these guys. The album is out now definitely one to check out.