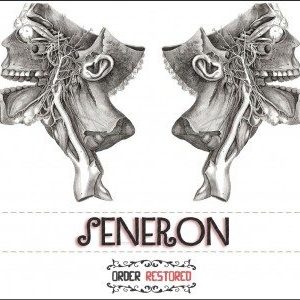 So another band from the North of Ireland, Seneron are a rock quartet who hail from Derry and have released their second four track EP Order Restored. I have to admit to not having heard of the band or their music before but given the great music that comes from up that neck of the woods I was looking forward to hear what was on offer from these guys.

According to the press release Seneron will be touring the UK and Ireland and have had some US airplay so they seem to be plenty busy. The four tracks on the EP are 'Please Me', 'Stand Your Ground', 'Dead Stare' and 'Just A Kid' and the overall feel of these tracks is heavy power based rock music in the same vein as Foo Fighters.  The music itself is well played and the EP is well produced and I’m sure that it will be enjoyed by a lot of people, however for me the guys just seem to play things a little too safe. All the tracks as stated above are of the same type with little variation in style and even some of the guitar solo’s mimic the main song riffs and none of the material strays too far from this formula. A little more diversity especially in an EP to show a wider range from the band would have been good to hear.

One quote from the press release states “Frontman John Shields, has a voice that is a cross between Scott Weiland and Joe Cocker”. This is a huge statement and, in my opinion isn't really the case as I actually think that the vocals are the weakest element in the band and detract from the music as it is actually way too prominent in the mix and takes away some of the drive and power from the music.

So how to sum up Order Restored form Seneron? Well the music is not too bad and I can see them gathering a good following regardless of my opinion on the vocals. The band would also need maybe some more variety in the music or try for a more unique sound especially knowing how hard it is too get noticed in the local music scene and given the amount of great bands already in it and try to push the boundaries and not play it so safe.