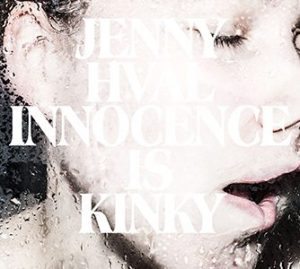 Out now at Rune Grammofon

A few weeks ago I read an American's view on Norwegians. Among those five millions you'll find the one writing this text, so obviously I was interested in what he had to say. In his blog post he went on about what he thought set Norwegians apart from the rest of the inhabitants of this planet. Some things felt more spot-on than others, but here's one thing he said which felt - surprisingly! - true: "If anyone raises a voice it is always abruptly (...) Norwegians usually give no sign they are about to explode until they actually do, like boiler rooms or hand grenades."

So, what does this have to do with Jenny Hval? The short answer: Everything! The long answer: The rest of this review.

Innocence Is Kinky is Jenny Hval's follow-up to Viscera and is her second album released by Rune Grammofon in three years. And what we have here is clearly a continuation of her playful, sketchy and raw approach which was captured into Viscera. If you were to convert Jenny Hval's music into pure literature her books would be filled with poetry. The overall sound is stripped down, almost minimal at times and rarely more than two layers thick. This brings the main focus to Hval's voice which is constantly in the center of everything. She uses her dominant and almost cat-like voice in a similar style like Sonic Youth's Kim Gordon. She shifts between talking and whispering more or less tonelessly into the microphone. Other times her voice shifts between angel-like singing and bursting into abrupt screams.

When there's an ocean of unstructured music the sudden waves of structures feels very unleashing. Throughout Innocence Is Kinky the brilliantly crafted 'I Called', a noise pop song Deerhoof would've been proud of, is a perfect example of this. During most of the songwriting process I imagine Hval sitting in her bedroom toying around with ideas with a tape recorder before heading to the studio to mix all of her sketches together. For the production of Innocence Is Kinky she assigned PJ Harvey collaborator John Parish to do the final touches in Bristol. One of the most playful and experimental examples is the meta-song 'Give Me That Sound' starting with Hval whispering "I need a sound now / But there is no sound / Give me that sound" in the left audio channel, followed by an obedient burst of noise in the right channel. It continues with more noise, some poetry and ends with a repeated whisper: "Give me that sound".

I'm not sure Jenny Hval is the average Norwegian when all comes to all, but before raising her voice she'll never give you any sign she's about to explode. Just like that American pointed out.