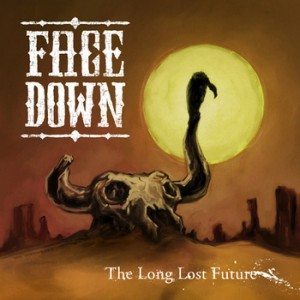 The first thing I noticed in the Press Release was “Stoner Thrash” and immediately I was intrigued by this oxymoron.  One style is a slow groove and the other extreme speeds and manic riffing.  So I was more than a little curious to see how Face Down who hail from Paris (well 4 of them do, with an Englishman from Spain on vocals) would pull this off on their debut album The Long Lost Future.

So headphones on, Play button pressed and the volume cranked up and into the first track ‘Lone Ranger’.  This is a great opening track with plenty of power and energy and some quality riffs; and he band don’t ease up any for track 2 ‘My Last Tequila’, again heavy fast riffage and high energy guitar solo’s. These guys can shred, no doubt about it.

Just a note on the vocals, as the tracks on the album for the most part are of the heavy/fast variety and the vocals just sit on the right side of the fence of gruffness without straying into incoherent growling, so I could actually hear the lyrics.

'Horse Power' is comes next, with a Southern style intro that builds up into a mid tempo heavy groove. ' Smoke Coat' again more of the same solid riffage.  Tracks 5 - 9 'Under The Sun' (a really nice little acoustic blues track), 'Kiss Of Death', 'Only Human', 'No1 Must Die' and 'Blow Away The Dust'  for me is were the band really start to show how good they are and these are my favourite tracks on the album.  The album closes out with 'Poker Time' and 'Evil Blues' with the latter being 1:31 long and then a 7 minute wait for a really pointless hidden track.

So how did Face Down fare with the “Stoner Thrash” tagline?  Well for me there wasn’t enough of a blend of the two styles quoted, more an 80-20 split in favour of the thrash tag.  However, if you like good heavy powerful riff based music, well produced and played by accomplished musicians (which I do!!) then The Long Lost Future is one to check out.  For me it’s a keeper and a band I will definitely be keeping tabs on for future releases where they can maybe get the % of “stoner” to “thrash” more evenly balanced if that is a style they are after.  Overall an album that I really like.