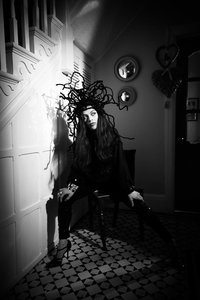 (((o))): So, first and foremost, who is Volenté and what is your musical background?

I grew up in a musical family in South Africa. My late father was an accomplished violinist and pianist and my mother an accomplished pianist herself.  I performed soprano solos at school from an early age and was a keen member of school and church choirs.  My first foray into modern music was aged 17, when I joined a 9-piece- avant-garde metal band!  Having relocated to London in the 1990s, I plied my trade as a session singer and worked out of the famous Berwick Street Studios. I moved on to Wales in my early 20s and immersed myself in the local Cardiff scene, regularly appearing with musicians in various styles.

(((o))): Your press release mentions 'many years of experience in the music industry', can you tell us how you've got to the point you're at now?

Through working with so many musicians over the years, doing collaborations and solo projects and also setting up Dockrad Records with my business partner.

(((o))): Do you think your local music scene has had any impact on you as an artist?

No.  As I have always been active in terms of making music.

I wrote the three tracks together and was told that it had to be a single as an EP has to have four tracks or more. I had been wondering about whether the word 'promises' should be removed from the dictionary, as in the society we now live in, people do not seem to honour the true meaning of the word whether it is in personal relationships, politics, working environments or within communities and this was a big part of the essence of the tracks.

(((o))): What do you think is the most difficult challenge facing new artists starting out in the industry today?

The biggest challenge I think is whether you have the right support networks in terms of finances, press and media, as all the mainstream artists seem to saturate the industry, thus leaving very little room for unknown artists to make a breakthrough.  It also seems to be about who you know and not what you know at times.

(((o))): As a solo woman in what is still a very male dominated industry, have you ever felt pressure to conform to people's expectations?

No, I have never felt any pressure to conform. It is not something that I would generally do, as I believe in individuality.  Unfortunately, most sections of society are controlled by the male population of the world and it will take a very long time for women to be treated equally in society.

(((o))): Every artist has different aims, and sadly very few decent ones get proper fame and recognition. What would have to happen for you to feel like you have ‘made it’ as an artist?

I think that if I were to have the same opportunity to be played on the radio as much as most mainstream artists do, it could make a difference not only in my life but it may also offer the public a chance to listen to something different, as opposed to hearing the same music played over and over by the same few mainstream artists.

It would be very difficult for me to narrow it down to one particular album or artist, as I was influenced by so many artists namely, Frank Sinatra, Queen, Stevie Wonder, Nirvana, Neil Young, Sonic Youth, Massive Attack, Sigur Ros to name but a few.

(((o))): This is ostensibly a column for introducing new bands. Who do you think we ought to include in it in the near future?

I quite like the Welsh band the Violas at the moment.  You can check them out at www.violasband.com.

I am always writing new material and will probably be releasing an album later in 2013/2014. It might be about love this time but we’ll see!