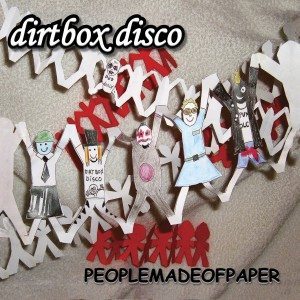 Out on April 29th through

I just wanna start the review by say in a big thank you to Dirt Box Disco for bringing back some real proper punk.  I don't mean the radio friendly mess the likes of Green Day, Blink 182 or Fallout Boy et al, you know the stuff that you can hear grannies, granda's, mum's and dad's singin' along to on the radio after a brainwashing 300 rotation per week onslaught!!  Punk was/is about rebellion against whatever, all with attitude.  Not about earning millions, overproducing music or rehab.  I don't think that PeopleMadeOfPaper will ever be heard on mainstream radio due to titles, lyrical content and the look of the band and for that I am truly happy.  The only downside to this is that the millions of people who will all be missing out on a fantastic 2nd album from this band from the UK who were formed in 2009.

The songs on this 12 track album are bursting with pure punk attitude, with fantastic hooks and sing-along choruses.  Honestly there isn't 1 bad song on it.  After the first listen I was constantly singing 'My Life Is Shit'  and the funny thing is my life isn't even shit, but I can't help myself.  Listening to this album reminds me of hearing Nirvana's Incesticide for the very first time and in particular 'Son of a Gun',  I would say that this would be the overall feel of PeopleMadeOfPaper but I don't really want to cloud anyone's judgement by reeling off a list of punk bands who may or may not influence Dirt Box Disco 'cause that would do them a big disservice as they have got their own sound and style that I would urge you to check out.  I really can't single out a favourite track and I've been listening to it for nearly a week solid!!.  These guys are great songwriters with an ear for really catchy melodies which I could guarantee would have you singing along to after 1 spin.

The band describe themselves from the Press Release as follows: "Born from the malfunction of a terrible musical chemical laboratory experiment! DIRT BOX DISCO are now free to roam from city to town, spreading the sonic filth to anyone that will listen, and people do listen! and they like what they hear! they like what they see! pure entertainment in every word!  Can you look at them and not think WTF?  NO! but they will titillate you into submission with a cascade of verbal and visual pleasure!  That is a definite! are you ready to rock n' roll? are you ready for Dirt Box Disco?", and who knows better than they do.

So to WEAB.I.AM, SPUNK VOLCANO, MAFF FAZZO, DANNY FINGERS and DEADBEATZ CHRISI offer a sincere thanks for a truly epic punk album. PeopleMadeOfPaper by Dirt Box Disco is an album that Billy Joe Armstrong wishes he could write instead of those "punk" opera type deals that he insists on spewing out for my granddad.  So now that difficult 2nd album is over let's be having the 3rd.