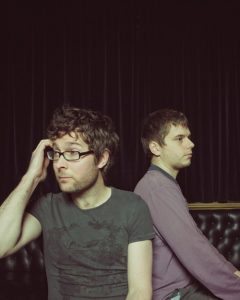 With the imminent launch of their new album ‘Fog Electric’ Edinburgh’s North Atlantic Oscillation are going to be making waves (sorry!) very soon. It is a beautifully sumptuous affair, full of dark melodies and moments of true loveliness.
Ahead of the release, our name Kevin Scott posed some questions to Ben Martin from the band.

(((o))): There’s a storm theme running throughout the album that seems far richer that just a grump about the weather – what was the inspiration for this?

Ben: There are certainly a fair few storm metaphors in the lyrics and the music has a fair bit of turbulence also. The inspiration wasn’t the weather though. It’s more to do with the way we think in conflict with the way we want the world to be.

(((o))): The fact there’s a recurring theme gives the album a narrative backbone – how much of a challenge did this present when writing it?

Ben: It was written over a much shorter period than ‘Grappling Hooks’ was so I guess there was less chance for change. Also I think if you care about what you are trying to say and about developing your musical ideas then you can generate allot of material. We did allot if scrutinising and cutting back to really get to the point of what the album was about. We always make songs work live before committing them to tape.

(((o))): This is an album that’s clearly meant to be listened to as a whole piece of music – how then does it fit into the downloading culture? Will listeners miss out by picking and choosing tracks?

Ben: If you have time to listen to the whole thing then great but hopefully each track gives you a taste of the whole album. Everyone uses music differently I think. I know people who can’t have music on in the background because it is exhausting to try and compete with and others who listen to anything and everything all day long without a second thought.

(((o))): How did you go about recruiting Tony Doogan as producer, and how did he influence the sound of the album?

Ben: It was a complex array of subliminal messages and hypnotherapy before phoning his manager and then asking him really nicely if he wanted to. He knows how to get a really good take and he knows his technical stuff. He also has the rare ability to create an ambiance that suits the mood of the track while also tying each track together to create an overall tonality to a record.

(((o))): There’s a lot going on in each track, but what element excited most about recording it?

Ben: There were some key moments. Getting the drums down and hearing the primary drum sounds was good, it felt like we had a good foundation then. Having the chance to record real instruments like grand piano, brass etc really brought the mix to life. Some of the brass was recorded one note at a time which took forever to record, edit and then mix. The whole mixing process is pretty painstaking but working with Tony makes everything much smoother, he gives you the options at every stage and will tell you if you are being silly when it comes to creative ideas instead of wasting time experimenting. He has a lot of experience and uses it wisely. Hearing the final masters was great after having had a couple of months away from questioning every tweak.

(((o))): How have you developed musically since the success of ‘Grappling Hooks’?

Ben: I was talking to a plumber the other day; he was fixing the pipes where I teach drums. He said you go through stages when you are plying your trade. Firstly you learn about whatever it is that you do and how to do it, then you become skilful in your mastery of the trade. After that when you have a level of mastery you start to apply a philosophy to your work. If ‘G.H’ was us learning what we do then I guess that makes ‘F.E’ us becoming more skilful. I am aware that that’s a weird answer.

(((o))): Which bands have you been listening to throughout the recording process?

(((o))): There’s a new generation of more experimental post-rock bands emerging in Scotland – do you see yourselves as being part of a ‘scene’ or more simply a band in your own right?

Ben: If we are part of a scene then nobody told me. Of the few musicians, artists, engineers, producers and bands I know none of them would say they were part of a scene either (post rock or otherwise). We all do what we feel we should do, express whatever it is we want to say or do and we all appreciate and support each other’s work as best we can. Most of us are introverts have families and are approaching middle age so it’s not going to get called a scene.

(((o))): With just one live date announced, when can fans expect a tour, and where are you planning on playing?

Ben: We are putting together a tour as we speak then dismantling it and then putting it back together again. There are also some exciting possible projects on the horizon as well. We are going to stay mysterious about it for now. Watch this space.